Miki City in Hyogo Prefecture is where the declining population, declining birthrate and increasing aging population are significant. Particularly in the area where aging has progressed the most, we have started full-scale revitalization of suburban housing complexes with a multi-generational community.

Miki City in Hyogo Prefecture is listed as one possible city that could disappear, as announced by the Japan Policy Council. With the progress aging of local residents, the local shopping districts have lost their bustle, and the vibrancy of the whole region is being lost, with vacant houses, vacant lots, and vacant stores becoming more visible. More than half of the city's population lives in the new town, and countermeasures for revitalizing the area cannot be expected without solving the problem of the new town itself. Therefore, Miki City in 2015, started a full-scale initiative to revitalize housing complexes aiming at an inflow of the younger generation and revitalization of the community in "Midorigaoka area", where the aging rate is the highest at 38.8%.
Daiwa House Industry has developed over 60 suburban housing complexes throughout the country to date. Many of them have been in operation for more than 30 years, and there are problems such as aging of residents, increasinge number of vacant houses and vacant lots, and a population decrease. In the future, it will be necessary to create a business model that revives towns where multiple generations can safely live comfortable lives while making good use of the residential environment of suburban housing complexes. We believed that with the "Midorigaoka and Miki Aoyama Housing Complex Revitalization Project" being established, that it will be possible to apply this to the country's suburban housing complexes that are faced with the same problems.

The Midorigaoka area is a suburban housing complex of single-family houses developed as a bedroom town of Kobe City and Osaka City. Currently there is an increase in the aging population due to the outflow of the population to residential areas in Kobe City where there is better convenience, and vacant houses and vacant lands have become conspicuous. 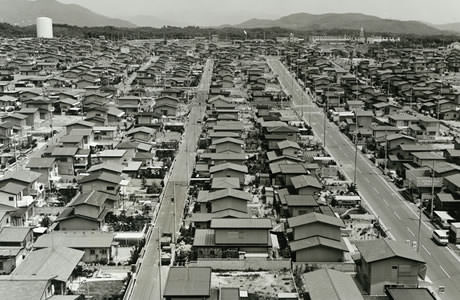 When Midorigaoka Neopolis was initially developed

Revitalizing of a suburban housing complex of single-family houses is a challenge that has begun in housing complexes throughout the country and Hyogo Prefecture also has put the "rebirth of residential areas such as old new town" into the city planning area master plan. With regard to the "Midorigaoka revitalization", we are in the progress of formulating plans by incorporating the know-how of the industry, government, academia, and the opinions of local residents, but we would like it if promoting and realizing these plans lead to revitalization of other housing complexes in the city as well.
So, by transmitting this "Midorigaoka model" outside the city, we hope that housing complexes that have declined in vitalization throughout the country will be revitalized.

In this "Midorigaoka Neopolis", we are working on creating a mechanism that we have never worked on before, aiming at the early formation of a "multi-generational community" that with comfortably accommodate the elderly and continually draw younger generations, providing housing to the younger generation by restoring existing housing, and relocating the elderly people within the community, and by offering community businesses and life support services.
Unlike the "it's finished when it's sold" town development approach up to now, we will create a new business model in this area by providing continuous service on top of this to provide a sustainable community that is attractive to the younger generation as well as being a safe and secure place for the elderly to live. We also aim to expand to other suburban housing complexes nationwide as well as emerging countries abroad.

For a Sustainable Future